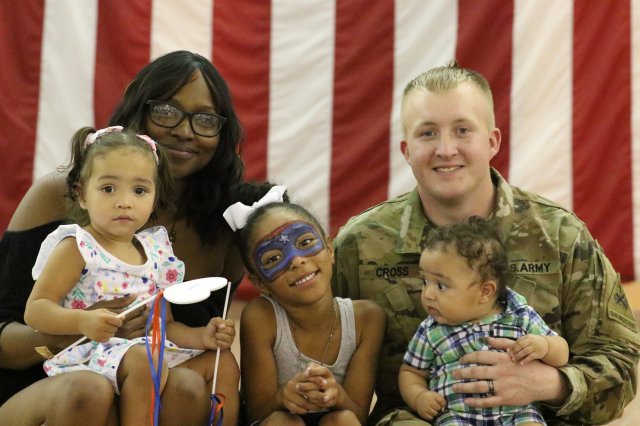 FORT MEADE, Md. — The Army recently made some of the most significant changes to Family Readiness Groups since their creation following the first Gulf War.

The groups have been re-named “Soldier and Family Readiness Groups” or SFRGs.

This designation links Soldier readiness to the Family, and clarifies the role of the SFRG to be more inclusive to Soldiers who are single, are single parents or have non-traditional Families, said Steve Yearwood, program analyst for the Office of the Assistant Chief of Staff for Installation Management.

The groups help ease the burden of home life, allowing Soldiers to focus on mission objectives, Yearwood said. He added the recent publication of Army Directive 2019-17 shifted the focus of SFRGs away from social activities and fundraising to a core and essential task of creating a network of communication and support for all Soldiers and Family members in order to enable readiness.

The goals and objectives for commanders in executing the SFRG include: serve as an extension of the unit command in providing official and accurate command information to Soldiers and their Families; connect Soldiers and families to the chain of command; connect SFRG members to available on-and off-post community resources, and offer a network of mutual support.”

Soldier and Family Readiness Groups are important for morale, Yearwood said. “It goes back to the Soldier knowing that his family is taken care of, and the spouse is not feeling alone because there is a support network that the spouse can go to.”

Families today are interconnected 24-hours a day and the SFRG needs to be able to leverage social media in order to sustain the command connection and network with Soldiers and Families, he said.

“I think that now as we look at our current environment, we have a different population,” he said. “You’ve got younger spouses — over 50 percent of the military are married. You have a younger generation that’s receiving information differently.”

No longer are newsletters and mailed correspondence the preferred methods of SFRG communication, he pointed out. “You’ve got a lot more people on social media and communicating differently,” he said.

In recognition that commanders may still have a need to fundraise to support events and activities that enhance readiness, the directive provides greater flexibility for fundraising by reducing restrictions on informal funds.

Army Secretary Mark T. Esper has pushed for changes to improve Soldiers’ quality of life, including upgrades to childcare, spouse employment and credentialing, and Soldier and Family Readiness Groups.

Army senior leaders attended a working group at the Pentagon in May focused on SFRGs and the new Army directive. Spouses of senior leaders met with other Army spouses and representatives from different major commands to review the changes of the Army directive and discuss improvements.

Since the Army formed the first FRGs in the 1980s, the program has had significant impacts on Soldiers’ lives. During the Gulf War, U.S. forces deployed 540,000 troops for extended periods, affecting thousands of Families and single Soldiers.

Today, the groups continue to help Soldiers and families cope with extended periods of separation during deployments. As the Army becomes more mobile in preparation for future conflicts, SFRGs provide needed referrals to support groups and organizations.

The groups also act as a direct conduit between commanders and Soldiers going on deployment or on missions.

Deployments are “tough for the Soldier,” said Yearwood, who served 22 years in the Army. “If the Soldier has a mission to accomplish, regardless of what that mission is, if that Family’s not taken care of, then that Soldier can’t focus on the mission, so it impacts readiness.”