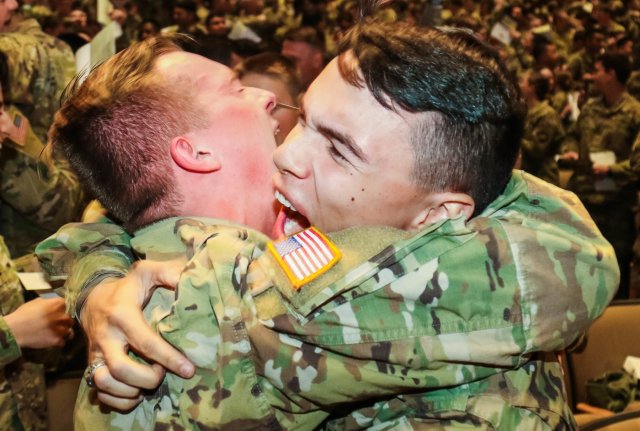 WEST POINT, N.Y. — During a ceremony Nov. 13, 1,089 members of the Class of 2020 at the U.S. Military Academy received their assignments for which branch of the Army they will start their careers in upon graduation.

The cadets received their assignments during the academy’s annual Branch Night.

The members of the class were each assigned one of the 17 Army branches, and for many of the cadets it was a night that saw them get exactly what they wanted as 88% of the cadets in the class were placed into their number one branch preference. That represents an 11% increase over last year.

“I think for the Army, it is a positive for management of talent, and putting the right talent in the right branches at the right time,” Maj. Jared Sunsdahl, the USMA accessions chief, said. “That’s what’s going to, I think, help the Army be better. It’s going to help out the individual officer. It’s going to benefit the Army for years to come.”

This year marked the first time West Point has assigned branches using the Army’s new Market Model Branching System, which will be rolled out to ROTC next year. The new model paired cadets with a branch by considering how they ranked the 17 branches as it has in years past, but for the first time the commandants of each branch also had a vote in which cadets received their branch.

Following branch week in September, the cadets in the Class of 2020 locked in their branch preferences for the sixth and final time. They each ranked the branches one through 17, or one through 15 for female cadets who opted out of armor and infantry. Each cadet was also ranked as most preferred, preferred or least preferred by each branch based on their branch resumes and interviews, which cadets were given the option to take part in for the first time this year.

Sunsdahl said they saw movement within the cadets’ top four preferences following the simulation as cadets moved up the branches they had a better chance of receiving based on the commandant’s feedback and moved down branches where their chances were lower.

“That was the market working, which helped branches get who they wanted as well,” Sunsdahl said. “We talk cadet preference a lot, but branches got more of the people they wanted this year than they have in past years. That’s where that commandant vote meant something. Now when somebody goes into a branch, the cadet wants to be there, and the branch wants them. It’s a win-win.”

Following the application of the matching algorithm, which was adapted from the medical residency matching program, and final adjustments made by West Point’s branching board, 96% of the cadets in the class were placed into one of their top three preferences.

Overall, 80% of the class was placed into a combat arms branch, a 5% increase over last year. For the first time, cyber was considered a combat arms branch along with infantry, armor, engineer, air defense, field artillery and aviation. The 40 cyber spots, up from 25 last year, accounted for almost the entirety of the increase in combat arms spots.

“The senior leaders in our Army are looking at multi-domain operations and how our Army is going to fight for future years,” Sunsdahl said. “They were looking at cyber as being one of those that is going to become a kind of center of gravity within multi-domain operations. That is why cyber was included with Combat Arms for the first time this year.”

The new Market Model Branching System is part of wider changes being made to how talent is allocated throughout the Army. The new Army Talent Alignment Program is taking many of the same principles of the branching system and is working to match officer’s talents with jobs requiring their individual skill sets.

The goal, she said, is that by better matching officer’s talents with their job while also considering where they want to be and what they want to do, it will increase the Army’s retention rates because their careers will be more fulfilling.

“What they hope to accomplish is to allow the individual officers to have more of a role in what’s happening with their careers,” Hicks McGowan said. We want to ensure that we’re keeping the talent that we currently have in the army, because we know that talented individuals have options. If we don’t allow them to have more of a role in the process, people will vote with their feet.”