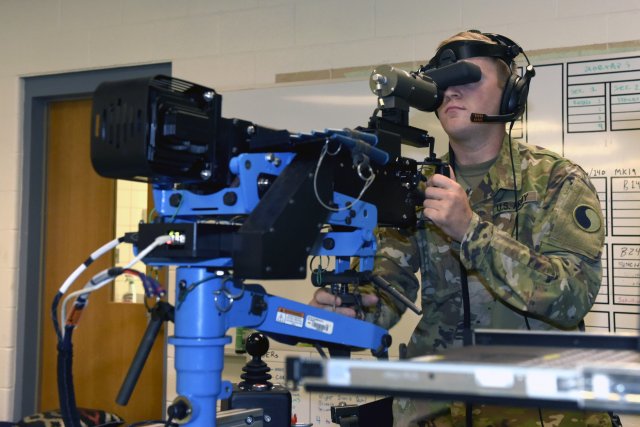 “Gunner ready,” he said to his truck commander, as they proceeded down a dusty road.

Soon enough, the commander called out an approaching target.

After a beat or two of silence passed, he was given the command to fire.

“On the way!” Murphy exclaimed, depressing the trigger and filling the air with a steady stream of rattling thuds as the weapon fired.

But the targets that received the hail of gunfire weren’t real — and neither was the weapon.

Both were part of the Individual Unstabilized Gunnery Trainer, a computer-based simulator that connects the body of a weapon to a virtual reality system and is used to augment training on crew-served weapons.

Designed to mimic firing from a vehicle turret, the IUGT can support a variety of weapon systems in addition to the M2, including the M240B machine gun and the MK19 grenade launcher. It can also simulate day and night scenarios.

For Murphy, firing at moving targets during the night scenario presented the greatest challenge.

“The moving targets are the most difficult part, especially when moving the turret so you can maintain that good line of sight,” Murphy said.

While the trainer replicates the feel of firing from a turret, said Murphy, a real-world mission or firing on a range has other elements that can’t be simulated.

“You have all your gear on. You’re probably sweating. You’re dealing with the heavy recoil of your weapon, your adrenaline is pumping [and] you’re sleep deprived,” said Murphy, describing those missing items. “The trainer is meant to get your feet wet, but it’s not going to be the same thing.”

But, Murphy said, the IUGT is still beneficial and goes beyond just target practice.

“[The IUGT] requires you to use the proper terminology and communicate effectively,” he said, adding the system can detect incorrect verbal commands, resulting in scoring penalties for the Solider or the inability to proceed with the training.

Without proper communication, he said, gunners, truck commanders and drivers may have a lower ability to assess threat levels during a mission.

“The longer it takes to assess a situation the deadlier or more unsafe the situation can become,” Murphy said.

That’s where muscle memory can be an asset, said Army Sgt. Donald Arbaugh, a cavalry scout in the same unit as Murphy. The trainer allows Soldiers to build the muscle memory of operating the weapon system, as well as the commands and firing procedures, making everything run smoother once in a real turret.

“When they actually go to the range, it just clicks,” said Arbaugh.

Simulators are used to build proficiency in other combat arms skills, too.

The Call for Fire Trainer is similar to the IUGT, but rather than firing from a turret, it allows Soldiers to request artillery support. With a computer-generated landscape projected on a screen, Soldiers training on the system using a map, compass and binoculars to identify targets and call for artillery fire using the correct procedures.

Like the IUGT, the firing battalion is simulated. Once receiving the needed information from the forward observers, the fire support NCO plugs that into the computer and the “fired” rounds are then seen impacting on-screen. If needed, the forward observers then must make adjustments to bring the rounds on target.

“It tests your skills with a map, compass, with the equipment and being able to work quickly,” he said. “It’s everything you are going to do on the range and every piece of equipment is either a mock-up or a digital version of it.”

Army Cpl. Devon Corrias, a fire support specialist in the same unit as Kelly, said the equipment mock-ups add to the experience, especially the trainer’s binocular and compass systems.

“The binoculars are synchronized with the compass,” he said. “[When] you’re panning, the compass follows along with the pan so it actually tracks like your heading, so you can actually see [potential targets].”

Like the IUGT, the Call for Fire Trainer has its drawbacks. For example, Kelly said, the training system can have difficulties accurately depicting depth.

“One of the things that forward observers have to do is estimate range,” he said. “It’s really hard to do when you’re already far away from a screen [that projects] a 2-D battlespace.”

“It’s really a perishable skill and we don’t get to do it enough,” he said. “But the more you add to the training, the bigger picture [forward observers] get to see.”

Ultimately, said Kelly, Army Guard members are better prepared for the warfight because of simulators.

“If any unit gets one and they are running it right and they know its procedures, they will just make themselves more lethal,” he said.